Here are biographies about

Few people remember the name "Wronker" and which significance the family of entrepreneurs and the company 'Hermann Wronker AG' from 1891 to 1933 once had, not only for Frankfurt am Main but far beyond.

Keeping the memory of these people, their magnificent life's work and their excruciating annihilation alive and remembering the millionfold murder by an incredibly cruel Nazi-regime and its willing helpers is the objective and admonition of this book.

Working together with a building contractor and an eminent architect Wronker achieved to realise his visionary concept of creating an american inspired warehouse in Frankfurt Zeil.

80 meters wide, unique for its time, this warehouse presented itself with a widespread offer of products at moderate prices. From 1910 to 1933  the company generated steadily mounting revenue with at times 3000 workers!

The Warehouse  Wronker on the "Zeil" street

After personal attacks and tirades of hate already before 1933, calls to boycott and an interdiction to step into their own warehouse followed for Hermann Wronker and his son Max under the Nazi-regime. Ending in the resumption through "aryanization".

Hermann and Ida Wronker with their grandchildren

The children Alice and Max managed to escape to a safe foreign country. The plan of the parents Ida and Hermann Wronker to emigrate into the USA with a valid visa was to late and failed. Abducted from France the married couple was presumably killed in 1942 in Auschwitz.

The Book ‚Vergessene Namen  Vernichtete Leben‘  The story of the jewish entrepreneurial family Wronker from Frankfurt and their big warehouse was published in the "Eigenverlag" and can be ordered directly from the author at: d_moench@t-online.de at a price of  € 14,80 + shipping.

The historic part of today's luxury hotel "Villa Kennedy" in Frankfurt (Main) (today's address: Kennedyallee 70) is the former residence of the Beit von Speyer family. Dieter Wesp researched as district historian for the foundation of "Polytechnische Gesellschaft" the history of the building. He found out that the villa was one of about 170 properties which the city of Frankfurt had brought into its ownership during times of National Socialism.

The city of Frankfurt is interested in the building which is surrounded by a plot of land of 8.000 squaremeters. It wants to lure the "Kaiser-Wilhelm-Institut" to come to the city and provide the building and park for it.

Under pressure and under value the property is extorted from the heirs. The plan works out and the institute for biophysics "Kaiser-Wilhelm" moves in in 1938. In WWII important radiation research takes place there and a bunker is constructed.

In 1948 the city compensated the heirs with a payment of 150.000 DM. The real worth of the estate shows when in the year 2000 the renamed institute, now "Max-Planck-Institut" for biophysics moved to the science campus of the university Frankfurt. Thecity sells the site for 180 million DM to a private investor.

But this was no individual case. Dieter Wesp discovers in the institute for the city's history a list that contains in total  170 estates which the city had acquired during times of National Socialism.

So far this list was not element of a systematic investigation. That shall change now.

In reference to publications and presentations from Dieter Wesp, the city of Frankfurt decided in 2018 to comprehensively investigate these transactions. The institute "Fritz-Bauer-Institut" will take that work on

The three sisters Barbara (Betty), Selma and Anna Wertheimer were born in Lambsheim in Pfalz. Their parents Karl and Luise Wertheimer had in total 7 children. In april of 1907 the family moved from Freinsheim to Frankfurt. Karl Wertheimer passed already in the year 1911. At first the family lived in the Burgstraße 19 and from May 6th 1910 to 1931 in the Mauerweg 10 on the 2nd floor. Here lived the three sisters and their brother Ludwig with the mother together and later at times with their spouses. In 1931 the married couples moved to their own appartments. The by now 73 year old mother relocated to her daughter Betty and her husband Eugen Kloos in the Textorstrasse 94 where she passed on february 6th 1937 and was still buried on the old jewish cemetery in the Rat-Beil-Strasse. 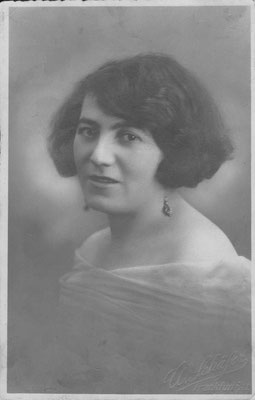 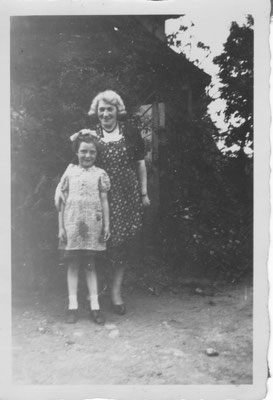